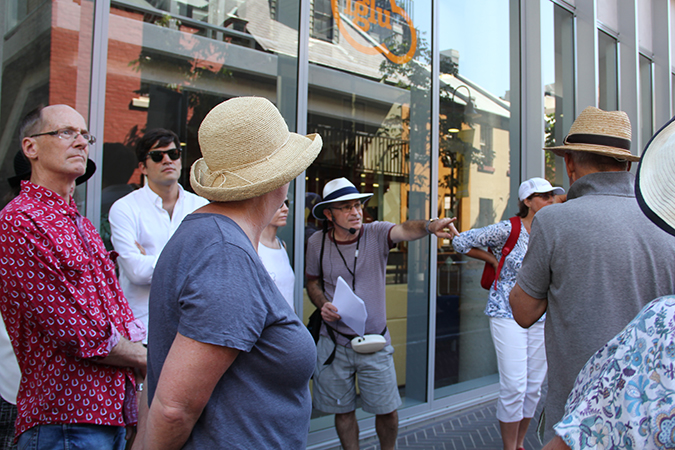 A CHIPPENDALE OFF THE OLD BLOCK
By Deborah Singerman

One of the AAA’s newest city walks is around one of the oldest, but most radically revamped, areas of Sydney. While Chippendale’s history featured in the tour lead by interior design and fabric expert Michelle Maras, the revitalised industrial architecture is more than matched by the residential and foodie haven now within the Frasers Property-redeveloped former Carlton & United Brewery site, bordered by Broadway and Abercrombie Streets, close to Central Station.

Our meanderings on a pleasant Saturday morning in November showed off Chippendale’s new glory from its laneways, spearheaded by Kensington Street, apartments with plant-filled facades, an upmarket shopping centre and unique museum to alleyways of food stalls, an idiosyncratic hotel and central public parkland.

We met AAA Volunteer Tour Leader Maras under the prominent yellow halo in the heart of Central Park. After years of living in London and Paris, Maras is entranced by cities and welcomes the chance to take people around the byways and vantage points of this variegated precinct.

Despite its shape, the splendid sculptural circle does not have a spiritual connection, but something much more prosaic – it represents the arm that spun the hops and other ingredients for the beers brewed at the old Kent Brewery.

As well as acknowledging the past, Tzannes Associates’ master plan looked to the future. It included a trigeneration plant, with its use of natural gas to produce low-emission electricity and thermal energy. hot water, cooling and electricity for the buildings in Central Park.

We learn about Tooth and Co, founded by 1830s arrival John Tooth, and brewery owner from 1835 until 1985. KB Lager was a favourite. Maras mentions staff benefits offered by the company, such as free beer (though drunkenness was a distinct no-no).

The Identifiable atmosphere of the area owes much to the network of laneways with their workers’ cottages and filigree iron balconies. The aptly named Spice Alley street stalls, South-East Asia reincarnate, has lanterns, tables and stools, as well as a growing list of restaurants.

It also has a fine example of adaptive/reuse (from award-winning Tonkin Zulaikha Greer). In the Old Clare Hotel, which is named after the owner's birthplace in County Clare, Ireland. The 1930s Carlton United Brewery Administration Building and the County Clare Hotel join together while also enclosing a former laneway The resulting mix of hotel rooms and suites, restaurant, a sweeping curved bar, and what they call a laneway foyer, has a surprising array of original artefacts and household items including old dentist chairs, and is unafraid to leave aspects of the building fabric open and unpolished

We also navigated the much-venerated One Central Park, the most vegetated high-rise in Sydney. Ateliers Jean Nouvel's 5-star green rated building (with collaborating architect PTW) is invigorated by Patrick Blanc’s hydroponic, vertical gardens, some 35,000 plants, soil-less, grown in planter boxes, with their own irrigation systems. We stare at the wall of plants within Central Park and on the Broadway street front, admiring the clusters of different plant species, even if we don’t know their names.

Different patterns grace the building opposite, the University of Technology, Sydney, Faculty of Engineering and Information Technology, whose aluminium screen represents the Os and 1s of the binary system. Then there is the dramatic heliostat, a cantilever of motorised and mirrored panels that capture sunlight and reflect it back to the shopping centre atrium and landscaped terraces.

Spreading our wings, we see Judith Neilson’s White Rabbit Gallery, a substantial exhibition space from a former Rolls-Royce service depot, which houses a collection of contemporary Chinese art and a much-loved tea house. Her latest philanthropic venture is a commitment to a $100 million independent Institute for Journalism & Ideas, also to be based in Chippendale.

We also stop at Neilson’s home, Indigo Slam, which won the 2016 AIA Robin Boyd Award for Residential Architecture – Houses (New) and is designed by Smart Design. The name is cleverly inscribed in the corten steel front gate, and an official product description aptly describes its monumental presence: “The curves and creases of the concrete façade fold, open or close, concealing and revealing, to create privacy, open to the light, form a balcony or maintain outlook as the rooms demand.” 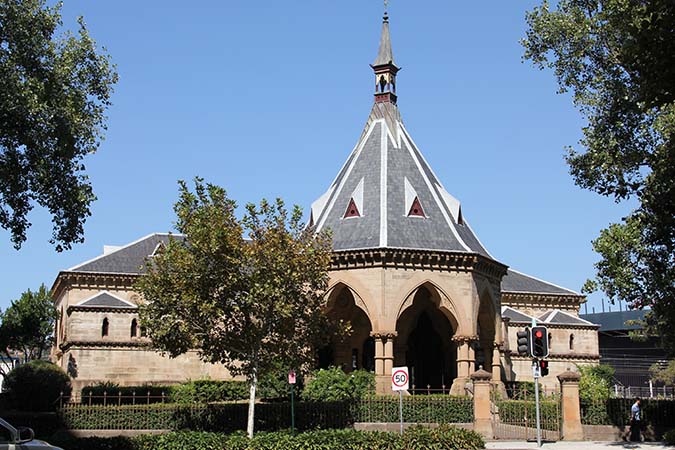 The distinctive architecture (harking back to 13th century Venetian Gothic) of Mortuary Station on nearby Regent Street sets a completely different mood as we contemplate the journey from this city end of the railway service, begun in 1867, that picked up coffins and mourners on Regent Street en-route to Rookwood Cemetery in Sydney’s west.

The AAA walk, you could say, touches all bases.

Experience the architecture of this fascinating inner city suburb by joining the next AAA Chippendale Walk.

Hurry tickets will sell out fast, so book now! 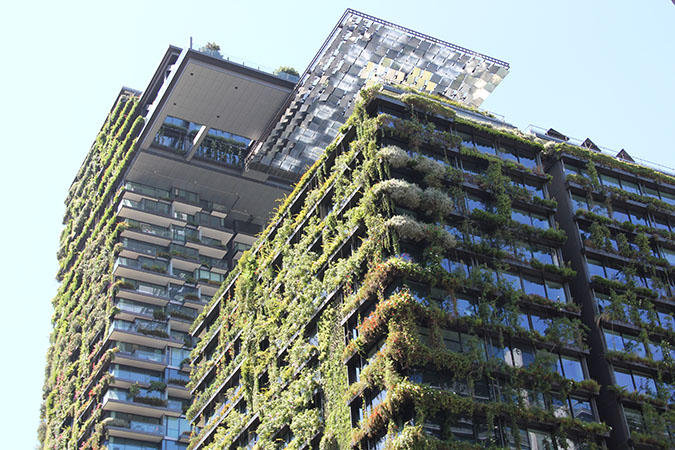 AAA Volunteer Deborah Singerman is a writer and editor, with extensive experience interviewing people, researching stories, finding angles and then disseminating the information for different readerships.

She offers professional writing and editing services for articles with content that can be adapted for websites, blogs, magazines and university journals.