In Memory of Dick Taylor 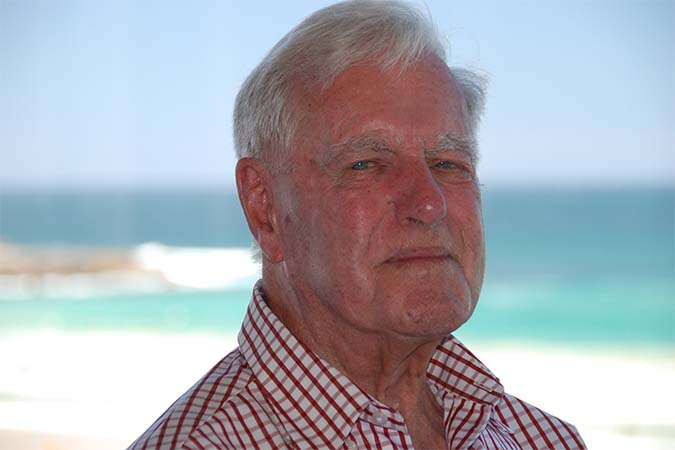 The Australian Architecture Association would like to extend their condolences to the family and friends of Dick Taylor who passed away this year. Dick was a founding partner of the engineering firm Taylor Thomson Whitting (TTW), who have been long time supporters of the AAA.

Edward Richard (Dick) Taylor was of the most admired and respected structural engineers of his generation. Working at a time of great change when advances in building design, materials, equipment and technology were altering the face of our cities, Dick Taylor and the firm he established in Sydney - Taylor Thomson Whitting (TTW) - were at the forefront of developments from the late 1950s.

Dick was born in Hobart on 21 January 1921, the younger son of Harold and Dorothy Taylor. Dick attended the Hobart Technical College. He began an engineering degree at the University Tasmania in 1938 where he showed early promise with a Distinction in Engineering Drawing and Design. However, like so many of his peers, he left his course unfinished to join the 2nd Australian Infantry Forces in September 1941. He served with the army in Papua New Guinea, which he recalled as terribly gruelling and dangerous. On returning to Hobart after the end of the war, he resumed his university studies and graduated as a Bachelor of Engineering at the end of 1950.

On June 4 1948 married Jean Monckton, youngest daughter of Edward and Dorothy Monckton. This was an enduring partnership filled with romance and adventure which lasted 70 years. Jean provided the support for Dick in their welcoming family home at Clifton Gardens which enabled him to concentrate on his career. There were four children.

After graduating, Dick worked briefly in Port Kembla before sailing to England in 1952. On arrival in London, Dick worked for a time with Costains on the new pre-stressed concrete. Later he joined Norman and Dawbarn in West London where he worked on the BBC TV studios, only demolished on 2003.

After a couple of years, Dick enquired about opportunities in the building industry in New South Wales and was immediately offered a position with the NSW Government. On returning to Sydney in early 1955 he was appointed lead structural engineer in the Government Architect’s Office.

In 1958 Dick took the decision to establish himself in private practice. Architects embraced Dick as their structural engineer, and he worked – often through the night at home - on the large block of units at Collaroy Beach which have subsequently survived many storms over the years. Later he set up in North Sydney. There, Jock Thomson and Alan Whitting joined him and the Taylor Thomson Whitting practice was formed, known ever since as TTW.

In 1959 Dick was glad to have David Norman and Leo Addicoat share his office space as they were setting-up practice as Mechanical Electrical Engineers. This was the start of a close relationship between the two firms. Together they developed the building at 48 Chandos Street, St Leonards which remains the headquarters of TTW.

All his life Dick had a great aesthetic sense and believed that the relationship between engineer and architect was imperative to achieving the best outcomes for a building. From the beginning of his career he worked successfully with leading Sydney architects then working at the NSW Public Works Department – Ken Woolley, Peter Hall and Michael Dysart. Projects included the now-demolished State Office Block (on completion in 1967, the tallest tower building in Sydney) and many schools and public buildings. Dick was an active member of the Association of Consulting Structural Engineers.

When Peter Hall who took over from Jörn Utzon as supervising architect for the Sydney Opera House, he introduced Dick to Ove Arup, the lead engineer, simply saying ‘You are meeting one of this country’s most brilliant engineers’.

Dick’s engineering legacy is a thriving practice at TTW now six decades old thanks to the firm's policy of bringing in young engineers as directors at a price they could afford. Dick always expected the best and drove himself hard. As he said himself: ‘Our work is only as good as the minds behind it’.

In 1982 Dick was appointed a Member of the Order of Australia for his services to engineering, in recognition of the standards of innovation, integrity and professionalism which were the hallmarks of his career.

Outside engineering, his passion was sailing which had been a family activity since childhood. He showed his mettle as a competitive yachtsman early on, winning many races on the River Derwent in Hobart with his brother in their Cadet Dinghy, and later the ‘D’ Class yacht Pixie. He was a crew member on Winston Churchill in the 1946 Sydney-Hobart race when Churchill was dismasted off Tasmania and Dick had to row ten miles to shore for help. Until he was well into his 80s, Dick found the greatest joy in sailing alone outside the Heads and there were many memorable voyages with family and friends, both in New South Wales and Greek waters. Dick was for a time the official measurer at the CYC. He also kept up windsurfing into his 70s.

Dick was also an exceptional yacht designer. His most famous design is Ice Bird, a 9.7 metre hard-chine steel-hulled vessel which was sailed by Dr David Lewis on the first single-handed voyage to and around Antarctica between 1972 and 74. Ice Bird is now in the Powerhouse Museum collection.

All who knew Dick described him as a gentleman with impeccable manners and a willingness to listen and respond with kind words. No account of his life would be complete without mentioning his great love of classical music and the enviable sound system he built in his home. Even in declining health, he never stopped seeking knowledge and appreciating the beauty of both the natural environment and human creations.

David Norman, founder of the engineering consultancy Norman Disney Young, wrote the following after Dick’s death: “Dick was essentially a very humble man who never within my hearing boasted about his ability and achievement. Yet he was at the time one of Australia’s most brilliant structural engineers. There is little doubt that TTW was considered to be a leader in the industry and renowned for the innovation and quality of their designs. Dick was always happy to mentor the young'.

Dick died on 20 March 2018. He is survived by Jean; children Cathy, James, Matthew and Richard; eight grandchildren and a step-granddaughter, and five great-grandchildren.