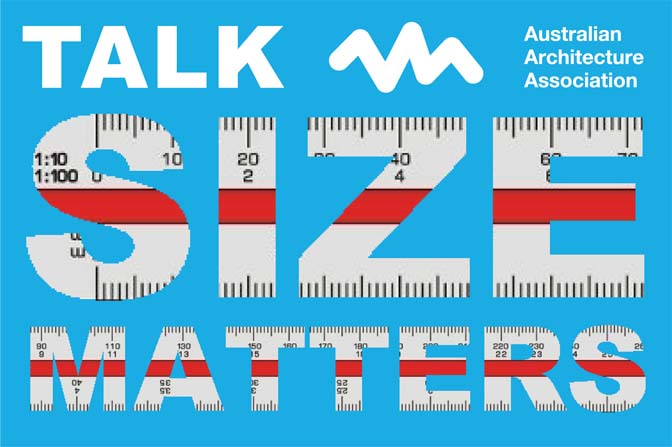 August is a great month to explore Sydney's design scene. Sydney Indesign takes place Thursday 12 August - Saturday 15 August and the AAA is partnering in the event with a special talk on opening night called 'Size Matters'.

Styled on the dynamic format of PechaKucha short talks, three award winning Sydney architects have been invited to discuss if size really matters!

Connor + Solomon was founded in 1996 by architects Paul Connor and Anthony Solomon, the practice offers talents in graphic presentation, sustainable design, masterplanning and interior design. Paul Connor, is both an architect and a talented painter. Early in his career he worked with internationally renowned late twentieth century modernist style architects John Andrews and Bruce James, collaborating with them on a wide range of award winning projects. He later pursued his passion for art completing a research masters in Fine Art. In addition to running his architectural practice he has taught and presented talks on Architecture and Fine Art here in Australia as well as overseas at such institutions as the Academie des Architectes Cité Internationale Des Arts studio.

Caroline Pidcock Architects is an award winning firm that was established in 1992 and has particular expertise in residential and community projects. Caroline's practice focusses on the design of sustainable architecture, following the philosophy of 'Living Buildings' and it's application to how we design our environment. Over her career she has served as President for a wide variety of design organisations, including the NSW Architects Registration Board, the NSW Chapter of the Australian Institute of Architects and the Australian Sustainable Built Environment Council. She is also involved in research and development of modular prefabricated flat-pack building systems through the company Origination which she established with David Pidcock in 2013.

Founded in 1986, Environa Studio is a medium size practice headed by principal architects Tone Wheeler and Jan O'connor. Environa studio undertakes a variety of projects that include urban design, civic and commercial buildings, group and individual housing for public and private clients. The practice has made sustainability the core of its work, and the driving force for their design philosophy and Environa Studio has won numerous awards and competitions for design and sustainability. Outside of his architectural practice Tone Wheeler is also an author, educator, radio personality and sustainability consultant. He is also the current President of the Australian Architecture Association.

Don't miss out on what promises to be a lively and fast paced exploration of design and scale. Click here to book your tickets.

Indesign: The Event has been held annually in design centres across the Asia Pacific for over a decade. In every city, Indesign: The Event is distinguished by a coming together of boutique commercial design houses, international and regional, and leading creative figures from the architecture and design industry. Formerly named ‘Saturday in Design’, the event was first held in Sydney in 2003, founded by Indesign Media Asia Pacific, architecture and design media company, publishers of Indesign, Habitus and DQ magazines, amongst others.