On Saturday 18 May, the AAA Open House Residential Bus Tour set off for a day of architectural and gastronomic exploration within the inner east and inner west of Sydney. Viewed over the day were five architectural projects which were explained in detail by the architects who designed them as well as some of their clients.

First residence of the day was the Salgo Kitching House designed by Sam Crawford Architects. Located in Bronte, the renovations and additions to the residence were completed in 2012 and won the 2013 Waverley Design Award. The clients approached Sam Crawford Architects for advice about buying the property. Despite it's 'ugly duckling' appearance, the architects identified that the property had real merit in its orientation and features.

The virtually unrecognisable inter-war bungalow was built over the foundations of a colonial era sandstone house and stables. Additions at the rear of the house concealed an original sandstone wall in quite a state of disrepair.

The renovation involved the demolition of both the blocked up first floor verandah and labyrinth of additions at the back of the house. The remaining house was then bookended with new light weight construction additions with slab floors to provide thermal mass.

The street front addition has a wall of louvred glazing onto a new sitting / reading room. This space is enclosed by a butterfly roof that is designed to maximise the ingress of northern sunlight in winter and create louvered highlight windows onto the south, encouraging natural ventilation to cool the house in summer.

At the back of the house, a small garden space was created exposing the painstakingly restored boundary sandstone wall. This lovely feature and the adjoining heritage listed remains of a stable next door are now visible through windows and glazed bi-folding doors off the new rear addition.

This addition contains an open dining and kitchen space, along with a walk in pantry and laundry. The roof over this space is again orientated to provide highlight louvred windows for natural ventilation and flood the area with northern winter sunlight.

Within the retained section of the house a new ensuite was inserted and a section of hallway was widened to provide a skylit light well that doubles as entry for a new main bathroom.

At ground level to the street a basement room was converted into guest accommodation. A new generous window with fully retracting glazing opens the space out to the exteriors and northern daylight. The inbuilt bench seat inviting visitors to repose, supine in the sunlight.

Second house of the day was designed by the established Melbourne practice, David Edelman Architects.

The new three storey residence in Bellevue Hill was completed in 2013 and is sited on the property so that the bulk of the house is pushed towards the street face on the South.

Unlike its neighbours, the house is kept relatively modest in size. The reason for this was soon revealed. Upon entering the house from the eastern side through a generous pivoting entrance door, one enters into a large open plan living, dining, kitchen and sitting space. These are orientated toward the north and the space opens out into an expansive established tiered 'secret garden'.

Despite the close proximity and bulk of the neighbours, the house has cleverly located expanses of glazed walls and stacking sliding doors that face onto small courtyards on the east and west edges of the property. The walls of the adjoining properties are utilised to give these openings a sense of privacy and enclosure.

An open tread stair at the entry is an attractive element in the open living space and ascends up to the private areas of the house on the third level. This level is divided into two zones. To the north is the main bedroom with a generous walk-in robe, ensuite, balcony and adjoining retreat space, which enjoy views across the delightfull garden. To the south is the childrens zone containing a bathroom, bedroom and adjoining retreat space with views out across the treelined streets of Bellevue Hill.

A corridor open onto the stairs links the two zones and contains a clever inbuilt storage unit that doubles as the balustrade to the stairs. Downstairs from the entry is an entertainment space that doubles as guest facilities and access to the garage.

Third project of the day was an experience of a different kind of building typology, a commercial space designed by the Sydney firm Chenchow Little Architects.

Completed in 2012, the Bresic Whitney office in Darlinghurst called for the fitout of 840m2 to accommodate 70 staff. A major part of the brief for the project was to create a space that doubled as a gallery where the clients extensive collection of contemporary art could be displayed to its greatest advantage. The clients also wanted a space that reflected the egalitarian ethos of the company, so that there is no perceived hierachy in the spaces for directors and workers.

The dual entry into a main reception and secondary reception, act as both the zones for welcoming visitors as well as acting as gallery exhibition spaces for some of the art collection. Accessed from these spaces is a street like grid of circulation paths, delineated by use of a polished concrete floor finish. These paths lead the building users around the office between glass pavilion meeting / office spaces, two open plan workstation spaces, seminar / conference space and service spaces such as the kitchen / breakout area and toilets.

The open plan workstation spaces are like the open spaces of a city, hives of activity with greenery spilling up frames connected to the exposed ceilings and inbuilt park benches around the perimetre walls.

The glass pavilions interspersed along the circulation corridors can be closed off for privacy or left open to maintain perception of the overall office space. They also act as miniture galleries for groupings of the contemporary art collection.

The colour scheme is kept relatively neutral with the use of black and white wall surfaces and inbuilt joinery. However the whole space is invested with a sense of warmth through the use of timber flooring that also delineates the functional spaces from the circulation spaces. The neutrality of the colour scheme most importantly allows the splashes of colour from video art, light art, and two dimensional works to remain a central feature of the design scheme.

After enjoying three projects it was time to take a moment to mingle with fellow tour participants and enjoy a delicious meal at Kitchen By Mike in Rosebery. 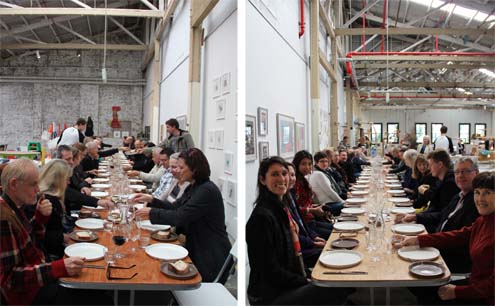 Fortified by lunch and stimulating conversation, the residential tour continued onward to it's last two residences by the Sydney firm Carter Williamson Architects.

First of the two projects was the Upside-down, back to front house located in Rozelle.

Completed in 2012, this major renovation of a small victorian row house presented several challenges to a redesign. Closely adjoined by neighbouring houses, the site is only 4.5m wide and slopes over two storeys from the street front address to a rear laneway. Entry to the house was originally through the upper storey, containing two bedrooms which connected downstairs to a dark lounge room, kitchen and shed fronting onto the laneway.

The clients brief to Carter Williamson was to create the maximum amount of useable space, whilst creating a greater sense of connection to the exteriors and natural light.

To solve this dilemma the house has been inverted, so that the main entrance to the property occurs at the rear laneway. Facing onto the lane is a single garage and access door to a stairway up to an open courtyard. This open space divides the property in two, with a flexible guest studio / bathroom / entertainment pavilion built over the garage and the main house located on the opposite side.

At courtyard level full height large bi-folding steel and glass doors are utilised 'disolve' the walls on both the pavilion and house to open up both areas into one expansive area to be enjoyed for entertaining and play.

The open sitting, dining and kitchen area on the lower floor of the house are orientated onto the courtyard. Off the street face a light well gives the kitchen borrowed natural light and attractive green space.

Ascending the stairs which have been made into a feature of the space, one enters the upper storey. This area is split into two zones split apart by a light well that filters natural light down to the kitchen and dining areas. Two rooms for the children and a main bathroom are located to the rear of the house and the main bedroom sits orientated onto the street face. Within this room concealed behind inbuilt joinery is a narrow stair up an attic ensuite. This has been cleverly concealed within a pleasing curved ceiling above one of the childrens rooms and the main bedroom. A sense of warmth is added to the neutral colour schemes of the two rooms by lining the curved ceiling with a timber finish.

Our final residence by Carter Williamson Architects, was the Cowshed House in Forest Lodge, also completed in 2012.

The residence is located on the corner of two narrow streets and literally utilises the original structure of an old brick cow shed.

Fashioned on the idea of a Roman courtyard house, a large street front pivoting entry door leads the visitor into a north facing open courtyard, with the L-shaped house built out to the perimeter of the properties boundaries on the south and east. A small courtyard was created on the southeast corner to retain a mature Jacaranda tree.

The southern wing is enclosed by an expansive raking ceiling that contains the living, dining, kitchen and stair up to a loft main bedroom, with concealed ensuite. This large open area makes a feature of the original brick cowshed walls giving the room real character.

With a limited budget for construction, materials for the house have been kept modest. Floors are polished concrete at ground level, walls are lined by screw fixed cement sheeting panels, structural timber framing for the loft and ceilings are left exposed and services like electrical wiring cable trays are left exposed to become an industrial style feature. Only the kitchen is finished to a high level, along with the timber glazed doors and high level windows.

As the sun set on a perfect day of blue skies, stimulating design and amenable company, it was with reluctance that our tour finally drew to a close.

The Australian Architecture Association would like to sincerely thank Sam Crawford, David Edelman, Tony Chenchow, Stephanie Little and Shaun Carter, along with their wonderful clients who so graciously opened their homes and business to us.