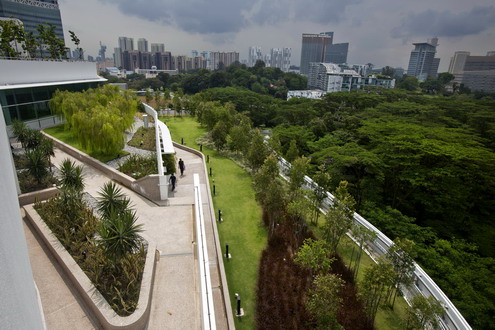 In the past month, we announced our 2012 Black Talk in Sydney and Melbourne by Ken Yeang with the poster featuring the Solaris project.  The Solaris building has just been shortlisted in the UK by RIBA for this year's RIBA Lubetkin Prize, winner to be announced in October.

Solaris is part of the Fusionopolis 2B masterplan designed by Zaha Hadid in central Singapore.  In 2008, local government Jurong Town Council held a competition with a brief following the massing designated by the masterplan.  Ken Yeang's design sets itself apart from other entries with the green ribbon wrapping around two major buildings with a bright and ventilated atrium in between.   The 3m wide landscaped ramp is the most noticible feature of the project, rising from the ground up to the roof.  With a total of 1.4km in length, the landscaped ramp is actually larger than the total site area! 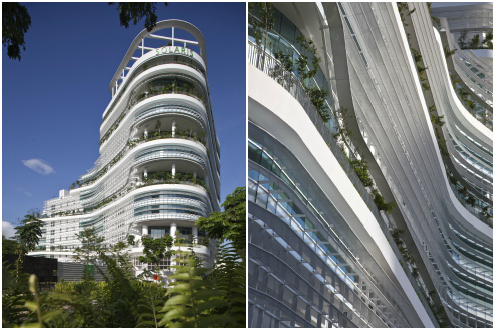 This continuous landscaped ramp is crucial to Ken Yeang's ecological concept because all living things can move freely within all vegetated areas in the building, creating a biodiverse ecosystem. The ramp terminates at the roof gardens and passes through landscaped terrances, all these are relaxation and spaces for events for the occupants.  The deep overhangs, louvres and vertical landscaping shades the building from the hot tropical sun while allowing interactions between human with nature.

The atrium with a diagonal shaft at the upper floors lets daylight deep into the interior space.  At ground level, the public plaza between the two blocks is naturally ventilated, providing a space for activities or performances.

With the above features as well as ecological water and electricity systems, Solaris has been certified "BCA GreenMark Platinum", the highest green certification in Singapore after it was finished last year.

For nearly 30 years, Ken Yeang has been exploring ways to make tall building works ecologically, the Solaris is probably the closest implementation of his visions to date.  To know more about his design philiosophy and how to make these ideas a reality, book now on the upcoming Black Talk by the end of August to take advantage of the early bird discount! 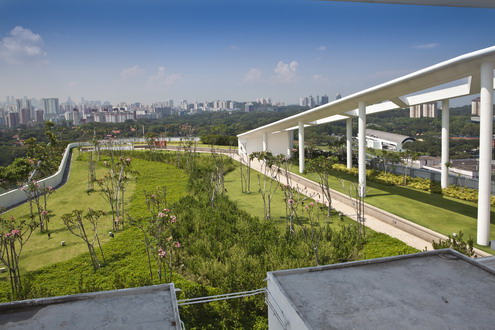