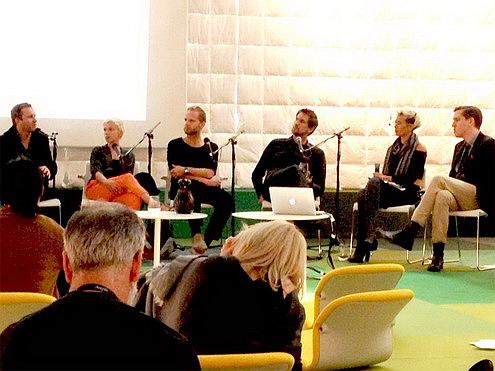 May was the month that Sydney once more hosted the design industry tradeshow DesignEX. Held from the 14th to 16th, Sydney's community of designers had an opportunity to explore the latest in products and design trends, catch up with contemporaries in the industry and explore some of the theory influencing today's designers in the talks series ‘7 Kinds of Happiness: Conversations on Design and Emotion'.

‘All About Architecture' editor Vanessa Couzens attended the last in the series of seven talks, which explored the themes of Australia's upcoming contribution to the Venice Architecture Biennale. ‘Formations: New Practices in Australian Architecture', will be staged in the Australian pavilion from the 29th August to the 25th November 2012.

Talk 7 of the series consisted of a panel discussion, moderated by Sam Spurr and David Burns of N, a curatorial collective that researches typologies of conversation and their impact on art, architecture and design.

The panel members were the curators for ‘Formations', consisting of; Anthony Burke, Head of the School of Architecture at UTS and Course Director for the Master of Digital Architecture; Gerard Reinmuth, one of the founding directors for the architectural practice Terroir and Practice Professor for the School of Architecture at UTS; and Eva Dijkstra and Michael Lugmayr of TOKO Concept Design, a multifaceted design practice that collaborates in the graphic, typographic, publishing and exhibition fields.

The discussion began with a review of the series theme, ways that design might play a role in the pursuit of happiness. Anthony Burke talked of how happiness is a by-product of what one does. The panel then discussed how the development of design concepts is often the result of dissatisfaction. This dissatisfaction compels designers to explore alternative solutions and look for new approaches to problems.

This lead to a discussion on the ethos behind the curating of ‘Formations'. Rather then employing a traditional display of architectural projects, this year's Australian biennale entry seeks to challenge conventional perceptions of what it is to be an architect, by utilising a variety of different media.

The global financial crisis, which has seen a worldwide rise in unemployment in the design professions, has brought about a shift in thinking about traditional practice. Designers have to explore new possibilities for contributing to the built environment. ‘Formations: New Practices in Australian Architecture' has been approached by it's curators as a way of showcasing how both established architects and emerging practitioners can make significant contributions to new domains of work through innovative ‘practice formations'.

Out of 124 submissions for inclusion in the Venice Architecture Biennale, six practices were selected. The contributors are:

Archrival (Claire McCaughan, Lucy Humphrey):
Is a collaborative not for profit organisation that seeks to bring the creative community together by creating unsolicited architectural works.

Health Habitat (Paul Pholeros, Steven Rainow, Paul Torzillo):
Is a practice comprised of architects and health professionals who began as a not for profit organisation devoted to the provision of social equality.

2112 Ai (100YR City) (Tom Kovac, Fleur Watson)
Is an exhibition of international submissions of visionary projects and master plans focused on the City of Maribor, Slovenia, which investigate the disruptive patterns of global change and envisage life in the extreme future.

While the panel discussion ended without any solid conclusions about the relationship between design and happiness. It was certainly interesting to obtain an insight into the organisation of the Venice Architecture Biennale and learn a little about the philosophies of it's curators.