Published Art bookshop is proud to support the Australian Architecture Association, by offering AAA members, volunteers and free e-news 'All About Architecture' subscribers, a 10% discount on their extensive range of publications on art, design, photography and architecture.

One of their latest offerings is the recent edition of El Croquis 163-164: Glenn Murcutt Feathers of Metal, a monograph on one of the AAA's founding members, architect and 2002 Pritzker Prize winner, Glenn Murcutt. At a retail cost of $130.00 ($117 for AAA subscribers), the 400 plus pages publication, details over 30 years of Glenn's architectural projects and is sure to be a fascinating read. 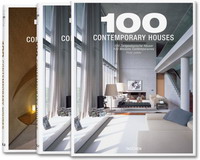 Home design enthusiasts may also want to take a look at 100 Contemporary Houses. This superbly edited hard cover two volume set of books in a slipcase, features beautiful houses from around the world. It is great value at $85.00 ($76.50 for AAA subscribers).

With Christmas fast approaching a book is the perfect gift for that design enthusiast in your life. Published Art offers complimentary gift wrapping and a handmade gift tag with each christmas gift purchased.

To redeem your discount, when buying in-store, don't forget to tell them you are an Australian Architecture Association subscriber. If you plan to buy online, you will also need to email Published Art: This email address is being protected from spambots. You need JavaScript enabled to view it., and outline the details of your purchase so that the 10% discount can be redeemed during the billing process. Again tell the helpful staff that you are an Australian Architecture Association subscriber.

Parlour Survey: And What About the Men?

Earlier this year 'All About Architecture' reported on a survey being conducted by Palour: women, equity, architecture, called 'Survey 1: Where do all the women go?'. Now it is the men’s turn!

While the data from the initial survey is being compiled, Parlour would like to know more about the men of Australian architecture. Who are they and what do they do? How are their roles and experiences similar and how are they different? Together the surveys will give a substantial insight into the industry and the profession.

Parlour invites you to help provide an expanded view of what architectural activity can be – it might include practice, academia, research, advocacy, government, policy, regulation, project management, media, allied built environment disciplines and much more. They are also interested to know about men abroad with backgrounds in Australian architecture, and about those who have ‘left’ architecture.

The survey will take approximately 10–15 minutes to complete and will be open until the end of January. Statistics and analysis of the both surveys will be presented on their website over time.

If you would like to contact Parlour about the survey please email them at This email address is being protected from spambots. You need JavaScript enabled to view it. 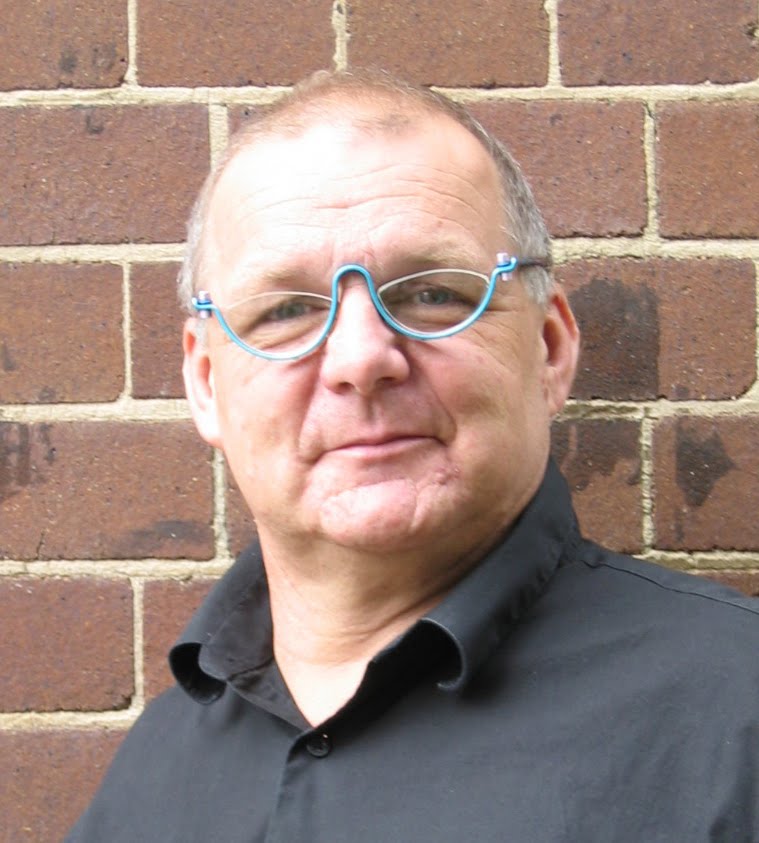 On Thursday 30 November the Sydney Morning Herald published it's annual special edition of The Sydney Magazine, listing 100 of the city's movers and shakers. Congratulations to Tone Wheeler and Rachel Neeson for being named amongst the Top 100 of 'Sydney's most influential: the people who have changed our city'.

Architect, Tone Wheeler is the current president of the Australian Architecture Association (AAA) and has been recognised as one of the individuals 'whose main vocational and social focus is not on themselves but on others, and who strive to achieve the greater good'. Check out the article featuring Tone.

Architect, Rachel Neeson been a long time supporter of the AAA as both a member and presenter of her practice's designs on AAA Residential Bus Tours. She has been listed as one of the individuals 'shaping public life and lifestyle - local visionaries and victors keeping Sydney on the map and the podium'. Your can read the article featuring Rachel.

Well done Tone and Rachel, we are so pleased to see your achievements recognised and see a future full of many more! 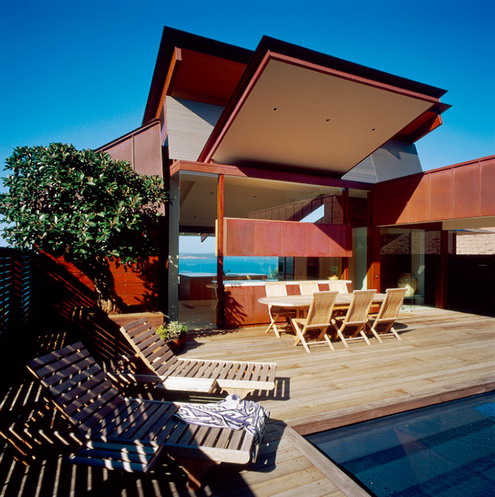 We have received some amazing feedback from participants who attended the October AAA Northern Suburbs Residential bus tour. In response to this, the Australian Architecture Association is pleased to announce the first residential bus tour for 2013 which will take place in late February.

Be inspired by the line up of architect designed homes that are planned for this leisurely day trip to the Central Coast. Further details will be provided in early January, so watch this space and don't miss out!

Hidden Sydney: A Second Take On The Rocks

Is The Rocks too touristy for your liking? A glimpse into the lives of the past inhabitants might help you see beyond the crowds of the weekend markets and further your appreciation of this historical cobbled place.  Mimi Wong walks The Rocks with the Australian Architectural Association and finds scandalous insights.

A place of early European settlement from an open-air gaol, to warehouses, sailors’ homes and dens, The Rocks has been transformed into quaint cafes, hip restaurants, eclectic boutiques, art galleries and museums contributing to the vibrant city of Sydney today. 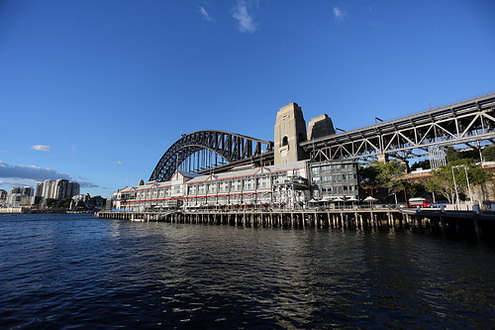 My previous visit long-ago to the Rocks had been dampened by the maddening crowds at the Weekend Markets which I had sworn never to return. However, today I find myself waiting eagerly for the tour to start in the front of the juxtaposed modern building of boxes which is the new extension of the Museum of Contemporary Art. This random composition of boxes is incongruent to the historic stone-clad building next to it; and like the majority of the population, we either accept it or hate it. Without ambivalence, our guide explains the designer’s concept which is to preserve the integrity of its next-door neighbour by differentiation while also remaining true to itself. So with an enlightened mind, we started our journey.

Included in the walk itinerary was a stop at Dawes Point to examine the iconic Sydney Harbour Bridge.  As an architectural graduate myself, this was quite a highlight as I have never known that the four impressive pylons supporting the bridge were purely decorative! What a jest to be told that they were not even in the original design and were only added to satisfy public concern about the structural integrity of the bridge! 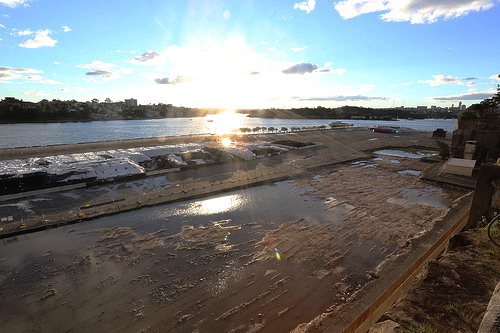 A few more stops later, we came to a park for a sweeping vantage view of Barangaroo. As the guide explains the naming of ‘Barangaroo’ and its relation to ‘Bennelong Point’, I couldn’t help but start to envision the future of Sydney. From its humble birthplace at The Rocks to a new major development metamorphosing the City of Sydney into a city of the 21st Century with new residential, commercial, recreational and cultural precincts.

As we covered the kilometres, we had literally walked through history and changes in The Rocks. We were kept enthralled by the juicy tale of bigotry and scandals of its colourful past occupants. One place that had remained intact was the Susannah Place built in 1844 by Irish immigrants. This venerable piece of domestic architecture shows the tough living conditions endured by the working class early migrants. 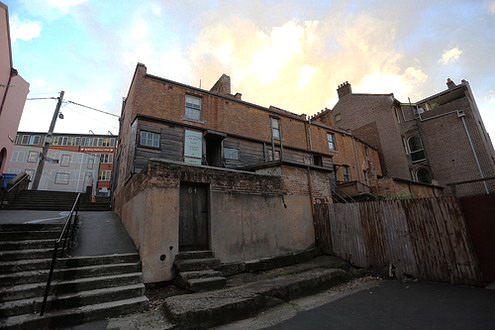 As the saying goes, ‘time flies when you are having fun.’ The delightful leisurely stroll with a group of architectural enthusiasts and locals through the changing landscape quickly came to a close after 2 hours.  As I proceeded to a new hip café for coffee, I find myself seeing The Rocks in a new perspective and saying: ‘I shall be back!’