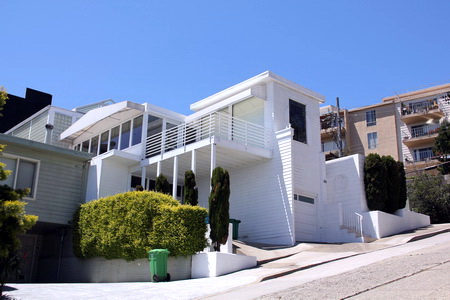 Neutra was an Austrian trained designer who grew up in Vienna during a time of great advances in Architecture, the Arts and the human sciences. He studied under and worked for one of the precursors of modernism, Adolf Loos before the outbreak of World War I. After the war he completed his studies of architecture and went to work in Berlin for the Architect Erich Mendelsohn. As a resident of Europe he witnessed first hand the rise of the Bauhaus and De Stihl schools.

In 1923 he migrated to the United States, where he briefly worked for Frank Lloyd Wright and later achieved significant recognition for his work as a practicing architect. During his lifetime he completed a huge portfolio of work within the United States, Europe, South America and Asia. Most of his projects were residential and were concentrated around Los Angeles and the California region.

Heavily influenced in his architectural ideology by his teacher Adolf Loos, Neutra was fascinated with the creation of utilitarian buildings that capitalised on modern building technologies and standardisation.

Richard Neutra completed only a small number of residences in San Francisco. Built on the side of Twin Peaks, Largent House is located on the corner of Hopkins and Burnett Avenues. It was completed in an economy still recovering from the Great Depression. Largent House was an anomaly of Neutra's work, in it's humble scale and more conventional construction out of timber, rather then steel framing and timber cladding. However, it shares a common theme with Neutra's other work in it's preoccupation with what Richard Neutra termed ‘biorealism'.

Neutra believed in the profound effect the built environment could have on the wellbeing of it's occupants. The health, both physical and spiritual, of the occupant should always take precedence over engineering or financial considerations. His ethos in building was to create structures that reduced their visual impact in the landscape. He believed that buildings should facilitate the trajectory of the eye out to nature, the landscape and sky.

Largent House, on a small scale, illustrates how Neutra would often capitalise on early zoning rules and push the built envelope toward the edge of the street face. At street level the façade is closed off from public view. By enclosing the lower levels, he created privacy for the occupants and space for an indoor swimming pool.

Water is a common theme in the Architect's work as he associated it with promoting physical health. In the upper levels of the residence, large windows and sliding glass doors onto balcony space, open out the interiors to outstanding views across the northeast. Now painted white, the residence was originally a slate blue colour. There was a later addition (not by the architect) added on the Western side of the residence.

If you are interested in seeing more of Neutra's work check out the Richard and Dion Neutra Architecture website.