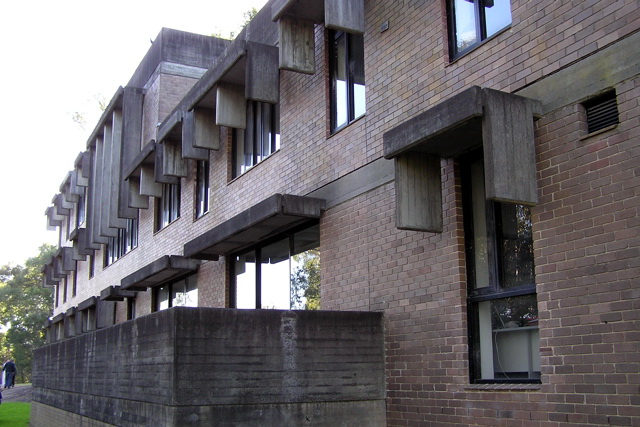 High on a rocky outcrop in Northern Sydney is situated UTS' Kuring-gai Campus. It is probably one of Sydney's least known architectural wonders, a selfcontained
campus with a variety of undergraduate, postgraduate and short courses.

Commencing life as the new home of the William Balmain Teacher's College in 1971 it became Kuringgai College of Advanced Education in 1974 and following the Dawkin's reforms to higher education merged with UTS in 1990. The NSW Government Architect is responsible for its design, specifically David Turner and Peter Stronege of Allen Jack + Cottier.

The design concept was for the building to be at one with its landscape, the plan follows the rocky ridge and the primary circulation follows the worn routes of native animals. The building terraces down the site following the existing topography, and has numerous terraces and planters supporting native gums shrubs and grasses. When viewed from certain aspects the building is almost lost in the bush - as intended.  It's Sydney School Architecture on a grand scale. The landscape architect responsible was Bruce
Mackenzie, Arriving at the front entrance in Eton Road, Lindfield is something of a surprise - the building is completely hidden in the bush - you suddenly come across the
main doors. Inside the building consists of a long twisting light filled spine with common rooms, lecture halls, faculties etc as stops along this "internal street".  Students sit along the street in the same way that people enjoy park like spaces, or at cafes people watching.

The building itself is of off-form concrete with a distinct wood grain. A white waffle slab ceiling, bright pink handrails, mid-brown quarry tiles and green carpet complete the ensemble. It is brutal but very sculptural, perhaps reminiscent of a castle - parts of the building are quite foreboding and other parts are quite fun - there are many ramps, bridges, outdoor courtyards, modern artwork and extremely heavy concrete window shades, of varying designs. It's a bunker, a castle and a sculpture rolled into one, yet
filled with light.

If you haven't visited, take the short detour off Pacific Highway at Lindfield via Grosvenor Road, or come up from Lady Game Drive in the Lane Cove River Park. Park you car and explore - it's well worth the trip - the building was awarded the Sulman Award for Architecture in 1978.