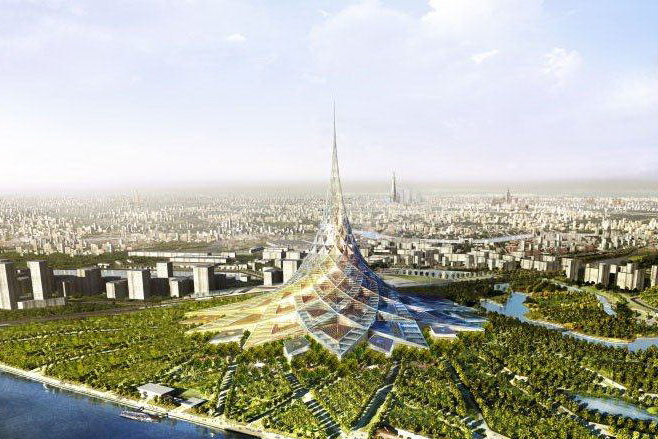 Despite the fact they only appeared in one game (Sim City 2000), arcologies remain an iconic symbol of the Sim City series. But just what the hell are they?

While appearing in the game as projects from the future, arcologies are very much real, the name deriving from "architecture" and "ecology".

An arcology is, in simple terms, a superstructure, a single entity that exists to not only house a large number of people in "hyperdense" living conditions, but enable them to be almost entirely self-sufficient at the same time.

While the idea of an arcology has existed for some time, the concept did not become popular until Paolo Soleri did two things: devote his life's work to actually building one, and coming up with the name "arcology".

Born in Italy in 1919, Soleri later moved to the United States in 1956, where he established the Cosanti Foundation, whose primary goal is the continued construction of Arcosanti, an actual arcology located just outside Phoenix.

First begun in 1970, work continues on the site to this day, with the eventual goal being the housing of 5000 people (though it presently is home only to around 100 students and volunteers) in a space of only 25 acres.

Arcosanti, true to the self-sufficient goal of arcologies, uses natural building materials for both heating and cooling, and in addition to housing contains facilities for casting bronze and ceramics.

Sadly, while work continues slowly on the project, the last building to be completed was finished off in 1989.

More ambitious projects could be on the way soon, though. In both China (Dongtan) and the United Arab Emirates (Masdar City), there are plans to build large self-contained cities based on the principles of arcology, with hard limits on settlement size and an emphasis on renewable waste and energy.

Both of those are still traditional cities, however, in that they are sprawling networks of buildings laid across large expanses of land. Russia's Crystal Island (pictured up top), on the other hand, is more in line with what a Sim City 2000 player would expect when they hear the word "arcology".

Designed by renowned British architect Norman Foster, Crystal Island is a massive construction project planned to occupy a 27 million square-foot area of the Russian capital Moscow. Reaching nearly 1500 feet into the air, when (or if) completed it would easily be the single largest structure on the planet.

In almost every way, it's identical to the hulking giants of Will Wright's classic PC strategy game. Designed to house tens of thousands of people, its beautiful and intricate outer facade is designed for the extremes of Russian weather, able to "breathe" through its porous surface, keeping people warm in winter and cool in summer.

In keeping with the self-sufficient brief of arcologies, Crystal Island was designed with residential, office and public spaces, and would be powered through a combination of wind turbines and a network of solar panels arrayed across its surface.

In other words, it would be a city within a city.

All of which is very impressive, but as of 2011, Crystal Island remains stuck on the drawing board. While the Russian government was initially keen on building the structure, and architectural firm Foster and Partners serious about designing it, the continued global financial downturn experienced since 2008 has put construction plans on hold.
So there you go! The next time you feel like reticulating some splines and playing Sim City 2000, know that those wacky robot cities of the future aren't as fantastical as you may have thought. (Luke Plunkett)
Reprinted with thanks to Luke Plunkett's Total Recall - a look back at the history of video games through their characters, franchises, developers and trends.

Ed's note: In 2012 I am planning an architecture tour to the West Coast of America including a visit to Arcosanti. Email me if you are interested in more information.