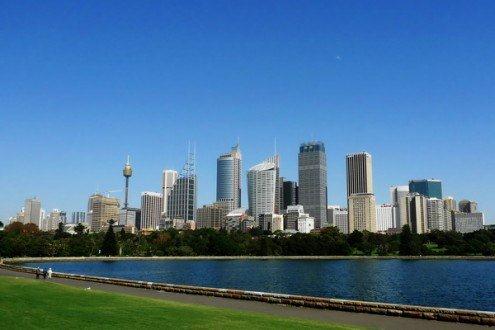 In June as a volunteer AAA tour leader I had the wonderful opportunity to show off some of Sydney's finest architecture to a group of Year 10 students from Warilla High School. The school is located on the South Coast of NSW, so the students had an early start to make it to Sydney for tour kick-off at 10am.  A total of 12 students were on the tour, together with their teacher.  The group had walked from Central Station to Circular Quay, passing some of Sydney's finest buildings along Macquarie Street.

A number of the students had not visited Sydney before, let alone witnessed skyscrapers close up or some of our finer built heritage, so it was important that the students visited a good cross-section of Sydney's buildings. As the tour was conducted on a weekday morning, lobbies were open and accessible and Sydney's hustle and bustle was on show.

The tour started at Customs House at Circular Quay, with a study of the model of Sydney located under the glass floor and then moved on to Australia Square, Seidler's 1960's masterpiece. Several of the students commented on the Sol de Witt artwork in the lobby and the Calder sculpture on George Street. The group explored the inside and outside of the GPO, which prior to the construction of the Harbour Bridge was Sydney's built icon. A stroll up Martin Place included a quick visit to the Commonwealth Bank's magnificent Beau Arts premises between Elizabeth and Castlereagh Streets. I asked the students to pick the fake material in the banking chamber. It seems that the "painted" green columns tricked the students as they do most people - they are not really marble!

The group visited Aurora Place, Deutsche Bank, where we watched the hi-tech lifts moving through the 30 storey atrium and then we called into Governor Philip and Macquarie Towers to see the "spitiual" lobbies.

The favourite?......Australia Square - for its slenderness and placement on a podium, providing a wonderful public space. It seems that people of all ages and backgrounds love this tower.

Two of the students are considering drafting / architectural careers so I hope the tour will encourage them in their future endeavors. (Robert Morley)