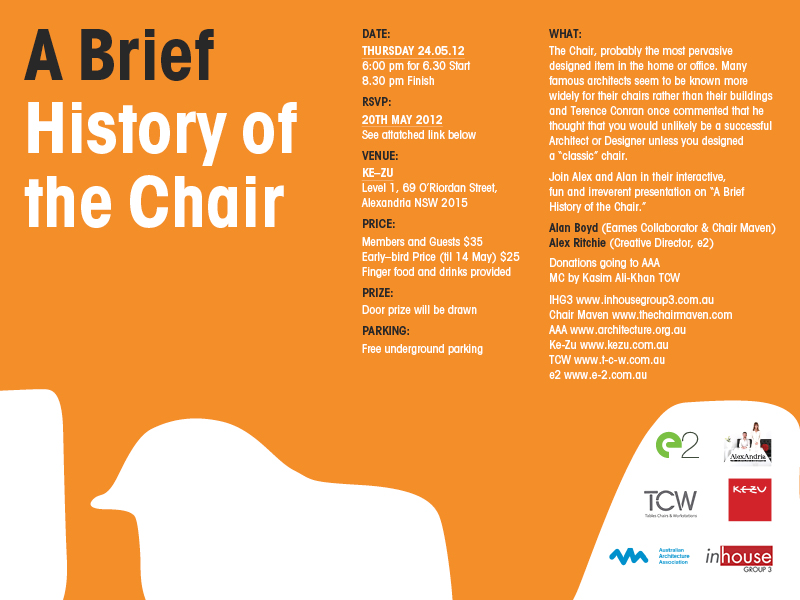 Click the image above to enlarge.  Don't miss out on the early bird discount (till 14 May) 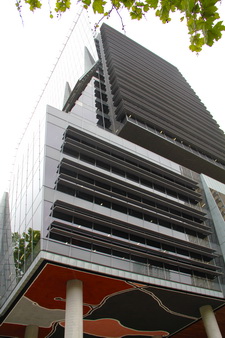 Coca Cola Place, formerly known as The Ark, is a 21 level, commercial office building, located at 16-40 Mount Street in North Sydney. Completed in 2010, Coca Cola Place is an addition to a growing list of Sydney buildings that has a 6 Star, Green Star (Office as Built - V2) rating, the highest rating achievable in Australia, under the Green Building Council of Australia's measurement standards for sustainable building.

The development undertaken by and owned by Investa Property Group, occurred as a result of a proposal put forward by the Australian architectural practice Rice Daubney. Coca Cola Place is exemplary of how the cooperative efforts of architects, their clients and contractors can create a commercially viable building that is also environmentally responsible.

On Wednesday 23 November participants in the Australian Architecture Association's sixth Short Black Architects in Their Space talk series, were able to experience some of the key spaces within the building, while the architect and development manager discussed aspects of it's design and construction.

Paul Reidy, Principal and Design Director of Rice Daubney and Mark Tait, Senior Development Manager at Investa Property Group, explained in detail, how the building design developed conceptually, the design challenges posed in getting approvals for a development with heritage issues and the practicalities of the construction process. 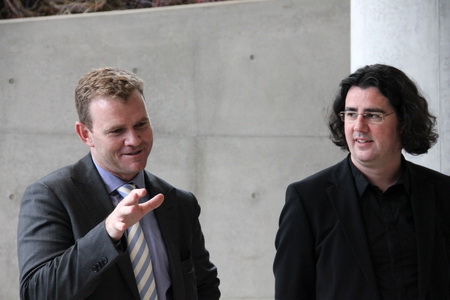 After listening to Paul Reidy and Mark Tait it was clear that they were passionate about creating and building projects that embrace green technologies and design practices.

Coca Cola Place utilises several systems for achieving it's sustainable credentials. Passive design systems have been used, such as orientating inhabited spaces to maximise natural daylight and views, and screening the western elevation to reduce thermal gain. These work in conjunction with active systems, such as energy efficient lighting, water efficient fittings and the collection of rain water for the buildings air conditioning cooling tower, along with the treatment and recycling of grey water, for use in toilets and for irrigation of adjoining green spaces. 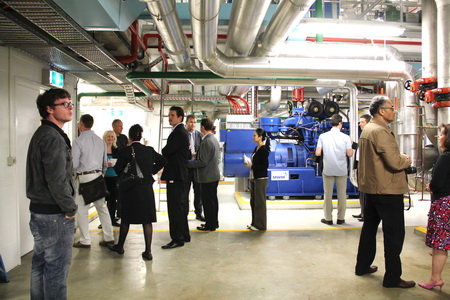 Attendees were also able to see the tri-generation system installed in the basement of Coca Cola Place. Mart Tait, with his engineering background, explained how the system utilised a combined heat and power unit, with an absorption chiller, to generate all the building's electrical, heating and cooling needs year round, with excess power generated, sent into the cities electrical grid. 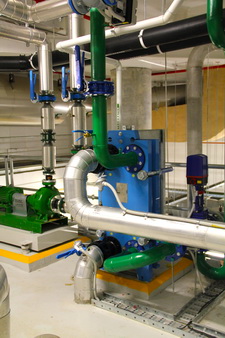 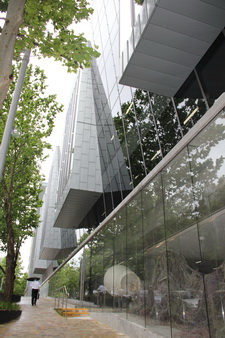 Aside from designing the building for the comfort of it's occupants, the building also incorporates elements for the soul. At the entrance to Coca Cola Place a giant painting (12m x 16m) has been applied to the underside of the building overhang. Installed under the direction of it's creator, Aboriginal artist Freddie Timms, the work depicts Lissadell station, where Timms spent much of his early life growing up and working as a stockman.

Encased beside the Mount Street façade, is a sculpture by Hany Armanious and Mary Teague, called ‘Lines of Communication'. A sinuous tangle of cabling constructed out of wiring that was retained from the demolition of the telephone switch exchange that was formerly on the site. 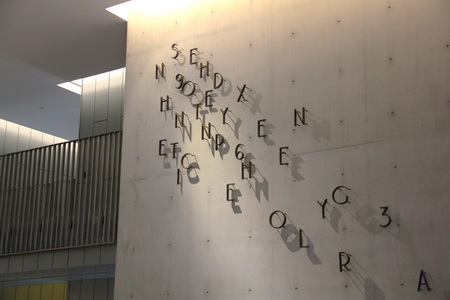 Further recycled elements have been incorporated artistically. The foyer and lift lobbies, reuse signage from the original demolished building. Of particular note, is a random arrangement of signage lettering above the foyer reception desk, designed by one of Rice Daubney's project architects.

For both public artwork and architectural enthusiasts, Coca Cola Place is building well worth visiting. The Australian Architecture Association would like to thank both Paul Reidy and Mark Tait for taking the time to share their experiences working on the building.

- Article and Photos by Vanessa Couzens

Have a Short Black in eClassroom 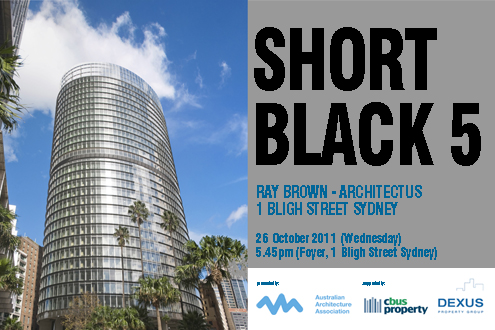 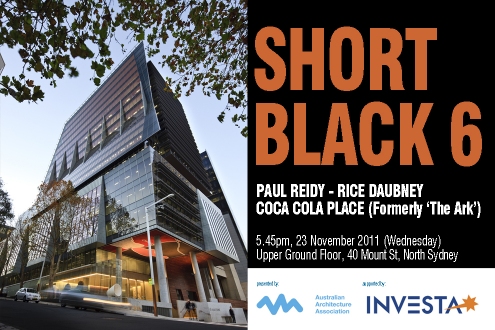 If you have missed any of our recent Short Black Talks at 1 Bligh Street or Coca Cola Place (The Ark), don't worry, the architects' presentations are now available in eClassroom as a formal CPD course.  You will be able to gain 1 formal CPD point once you complete the multiple choice questions.

Some previous AAA talks are also available in the design section of eClassroom, look for the entries starting with "AAA".   Cash back of up to $25 are available for AAA members!

The Perfect Gift for Architectural Enthusiasts

Ever wondered what to give your loved one for an upcoming birthday or to celebrate a special occasion? The AAA has the perfect solution!

Give them the AAA limited edition, boxed set of cards, the perfect gift for the architectural enthusiasts in your life.

With 24 cards of varying sizes, printed with drawings by 23 of Australia's most loved Architects, such as Glenn Murcutt and Harry Seidler, this set looks great as a framed arrangement.

These cards are now available for online order for $75 while AAA members enjoy a special price of $60 (Including postage to Australia only, for delivery to other countries, please email us at This email address is being protected from spambots. You need JavaScript enabled to view it. for further details.  Click here to get it now! 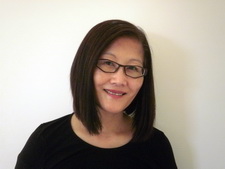 Kooiying Mah has been practicing architecture in Australia and South East Asia since the early 1980s. Through architecture, her projects are always devoted to understanding their climate, topography, lifestyle and culture.

Born in Malaysia, Kooiying migrated here in the 1970s to study architecture at the University of Melbourne. After several early years at notable commercial practices in London, Kuala Lumpur, Melbourne and Sydney, she started her own practice.

Kooiying has since completed numerous private residential projects, as well as large scale commercial projects such as The Civic Hotel in Sydney's CBD. This project was awarded an RAIA (NSW) Commendation for recycling and adaptive reuse in 2000. 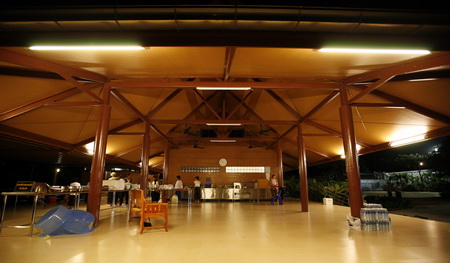 The Scarp House is also another project gaining recognition through the Historic Houses Trust 2008 Sydney Open Focus Tours as well as being featured in Monument and ‘21st Century Houses Down Under' publication. The house is impressive for its structure and sensitivity to the difficult surrounding environment. Located on a steep incline in the Castlecrag foreshore, it unfolds delicately around a large rock escarpment, embracing part of the rock as a unique feature to the house. 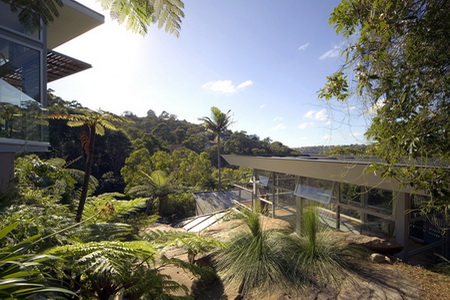 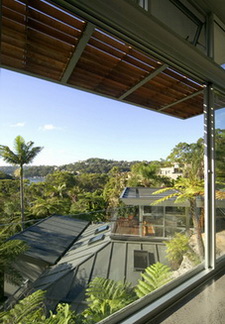 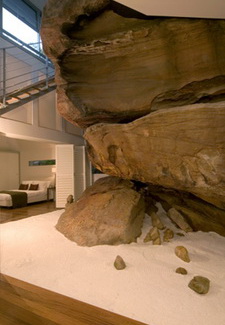 One of her more recent and special projects are ‘Dana Hall', a meditation and giving hall for devotees to a Buddhist monastery in North East Thailand.

This was a pro bono project that involved her being actively engaged with the Buddhist monks and their ascetic lifestyle in the rainforest environment. 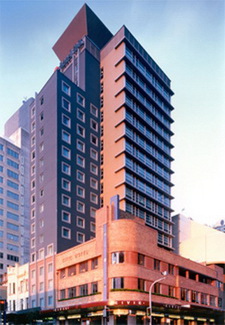 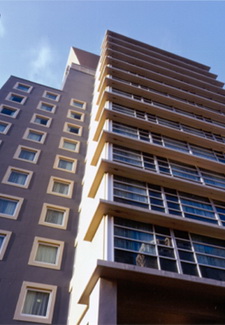 Kooiying relishes having the skills of an architect, believing it is invaluable to be able to contribute to the community and environment through architecture. This is defined in such projects as ‘Dana Hall' and ‘The Scarp' but is also distinct in her approach to larger commercial projects such as The Civic Hotel.

Kooiying considers public engagement with architecture as integral to the profession, which is why she enjoys volunteering as tour leader for the AAA Sydney City Architecture Walk. 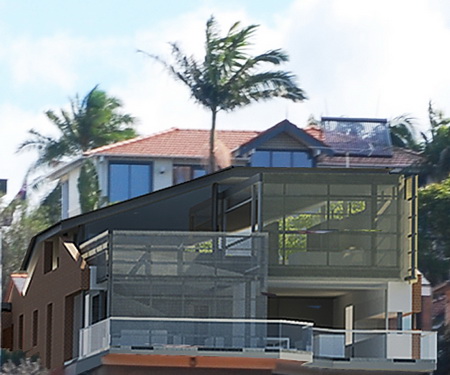