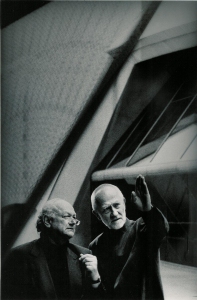 Pritzker Architecture Prize is to honor annually a living architect whose built work demonstrates a combination of those qualities of talent, vision and commitment, which has produced consistent and significant contributions to humanity and the built environment through the art of architecture.

In announcing the winner of the 2009 Priztker Prize, Thomas J. Pritzker, chairman of The Hyatt Foundation, quoted from the jury citation, "Peter Zumthor is a master architect admired by his colleagues around the world for work that is focused, uncompromising and exceptionally determined." And he added, "All of Peter Zumthor's buildings have a strong, timeless presence.  He has a rare talent of combining clear and rigorous thought with a truly poetic dimension, resulting in works that never cease to inspire."

Pritzker Prize jury chairman, The Lord Palumbo elaborated with more of the citation: "Zumthor has a keen ability to create places that are much more than a single building. His architecture expresses respect for the primacy of the site, the legacy of a local culture and the invaluable lessons of architectural history." He continued, "In Zumthor's skillful hands , like those of the consummate craftsman, materials from cedar shingles to sandblasted glass are used in a way that celebrates their own unique qualities, all in the service of an architecture of permanence."