Mortuary Railway Station is situated at the Sydney Railway yard at Chippendale close to Central Railway and Railway Square.

This beautiful ornate Gothic style building was part of Sydney’s Rookwood Cemetery railway line. Carrying the dearly departed and their funeral mourners to their final resting place at Rookwood Necropolis by train. At the other end was a similar Mortuary Station also built out of the Pyrmont sandstone. 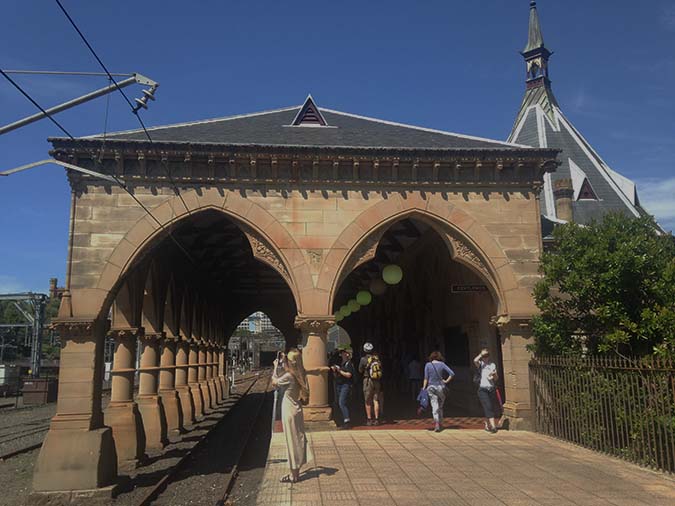 Opened in 1869, designed by the colonial architect James Barnet in the Gothic Revival Style. Barnet also designed other great buildings such as the Sydney GPO at Martin Place . The station featured two varieties of sandstone, the biscuit brown being used for columns and cornices while white was used for the plain surfaces. 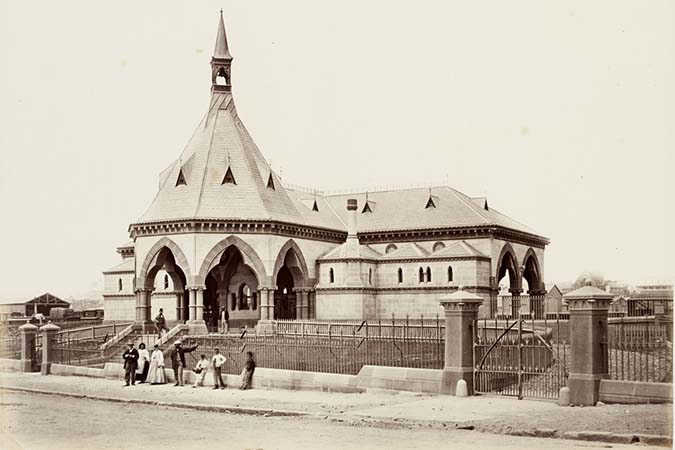 Due to the use of the building it had a rather ecclesiastical feel about it with the Gothic arches and souring roof. At the time sandstone was commonly used just for the foundations, dressings and pavements in buildings. Barnet used the expensive sandstone throughout the structure which was rather decadent. 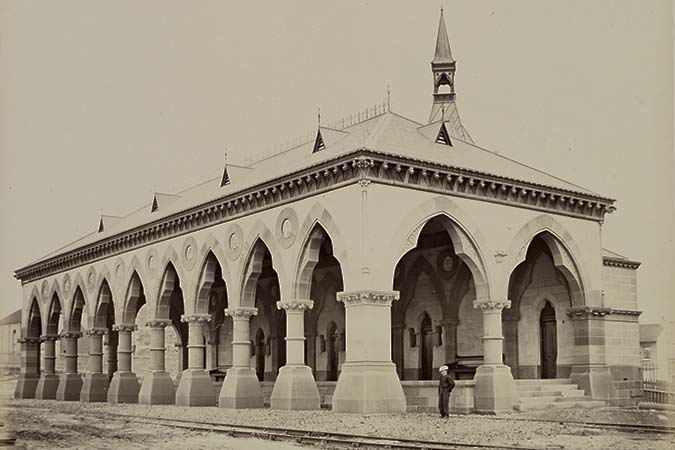 Mortuary station is set back from Regent Street and elevated, to create an imposing visual impact. Entry is via the octagonal porte-cochere which features trefoil arches. The original roof was finished in slate but latter replaced by copper sheeting. Atop of the porte- cochere sits a shallow bellcote. the bellcote houses the bell usually for churches which gives Mortuary Station its religious feel.

The platform building includes two small waiting rooms acting as ante-chambers to the ladies and mens toilets and a ticket office.

Over the platform and the track is a covered roof made up of nine stone trefoil arches, with circular ornaments in between each depicting a different motifs such as apples, cherubs, pears and pomegranates.

At the time, the platform was 12 feet wide which was considered rather wide. 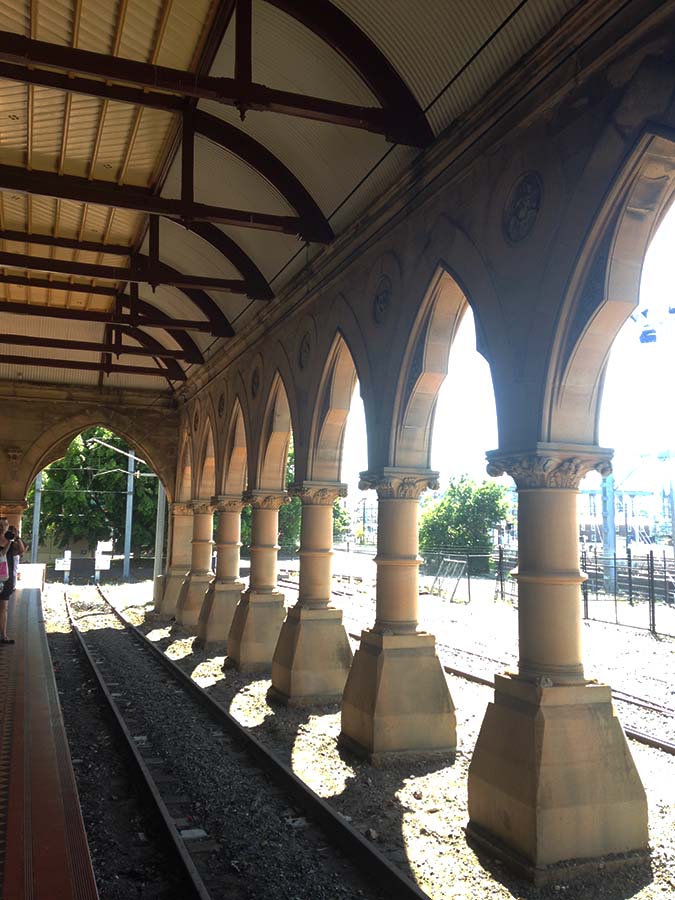 The sandstone building is covered in carvings of acanthus leaves, angels and stars. Typically at the time railway stations were designed to be more decorative from the street side only. James Barnett gave Mortuary Station a strong visual presence when viewed from the street frontage as well as when viewed by train travellers arriving into or departing Sydney Station thus passing Mortuary Station.

Mortuary station stopped functioning as a station for the funeral trains around 1938 with the introduction of the motor car. Subsequently it was then used a the loading point for horses and dogs. It was later used as a parcel interchange facility.

In 1955 the sister building to Mortuary Station which was located at Rookwood cemetery was dismantled stone by stone and rebuilt in the Canberra suburb of Ainslie to become the All Saints Church which still operates to this day.

Thankfully with the intervention of David Hill in 1981 it was announced that Mortuary Station would be restored to its former glory. Lester Firth Associates Pty Ltd prepared the drawings for the restoration of Mortuary station. After the restoration of Mortuary Station tenders went out for a suitable use for former funeral station whereby a pancake restaurant was established that incorporated two railway carriages. The restaurant closed in 1989 whereby City Rail tried to find a new life for the station.

Due to damage by termites to the roof trusses and repairs to the slate roof conservation work was then carried out in 2011 by Caldiis Cook Architects with work completed by Degnan Constructions.

Due to the small size of the Stations’s three rooms comprising of the ticket office and toilets which do not provide sufficient space for adaptive reuse meant that the station is hardly used. It is sometimes hired for events or used as a backdrop for wedding photos. It was recently used as an English country train station in the Lakes District for the Peter Rabbit film. 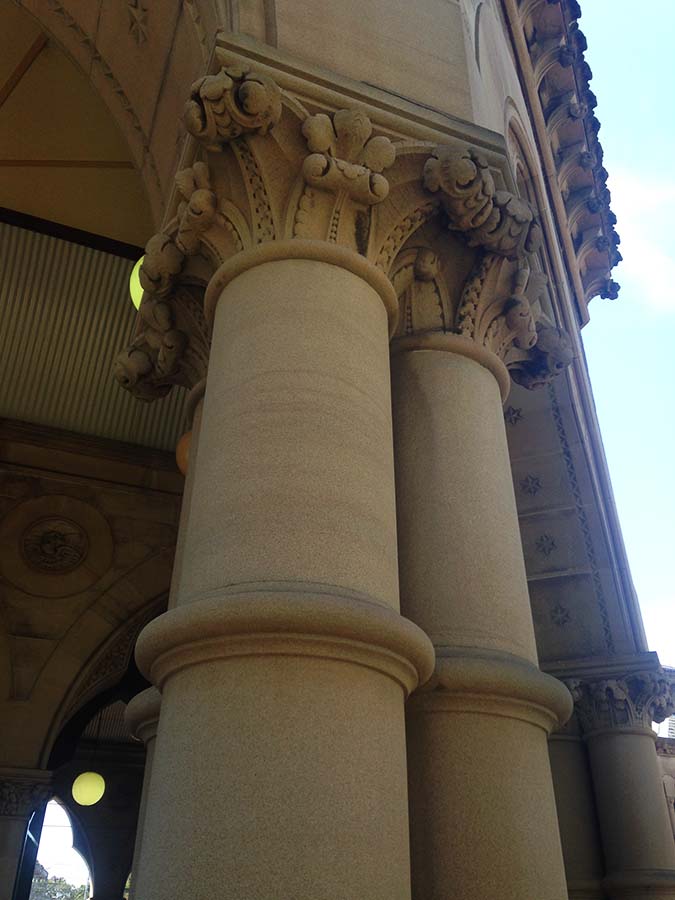 I wonder what James Barnet would make of his rather extravagant sandstone station which started out as a government building with an ecclesiastical feel in the Gothic Revival style to take mourners and their dearly beloved deceased to the Rookwood Necropolis now being used in 21st Century as a set for a film? Let's hope it gives Mortuary Station a new lease of life - adaptive reuse as an English Railway Station and hopefully introduces a whole new generation to one of our great examples of Sydney architecture.